About the Museum About Its Construction

COMICO ART MUSEUM YUFUIN is located across from Yufudake Mountain–the symbol of Yufuin. This location, which looks over the gentle, sloping ridges of Yufudake Mountain, magnificent yet unintimidating, is also the former site of the previous Yufuin Art Museum. As a newcomer to the town of Yufuin, it is deeply meaningful to have inherited its name and to continue in the role of upholding the historical location that has been beloved over many generations.

Kengo Kuma, who was in charge of the architecture for COMICO ART MUSEUM YUFUIN, aimed to create architecture that is capable of coexisting with nature for generations. He cleverly utilized materials closer to nature, like wood, soil, Japanese paper, and water, to create a fusion between the building structure and nature. In designing COMICO ART MUSEUM YUFUIN, Kengo Kuma always kept in mind the idea of a “village.” Individual structures in harmony comprise a village. His goal was to create a building that would melt into the townscape, avoiding overly powerful, flashy designs that stood out. Yufuin is a gathering of small houses. In order for the roof to blend in and be in harmony with the village-like town of Yufuin, the roof was made in small pieces placed next to each other. 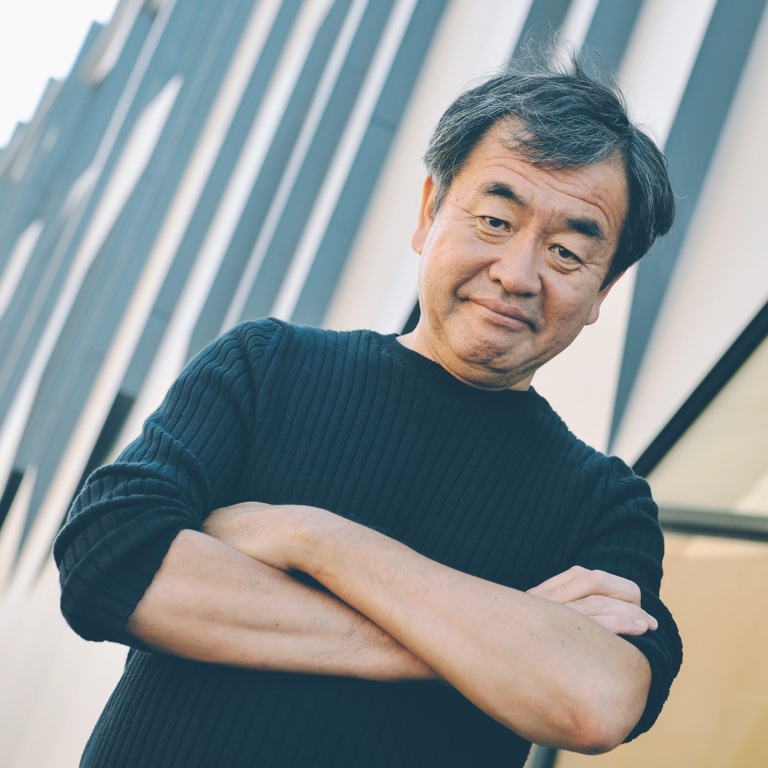 Lead of Kengo Kuma & Associates, and Professor at the University of Tokyo. Currently working on large-scale projects both in Japan and internationally, including the New National Stadium (Tokyo, Japan), Saint Denis station (Paris, France), and Victoria & Albert Museum building (Dundee, Scotland). Recent works include University Multifunction Center at EPFL in Lausanne (Switzerland), Folk Art Museum at the China Academy of Art, Besançon Art Center and Cité de la Musique, Toshima City Hall, Kyushu Geibunkan, The 5th Kabukiza, and many more. He has published many written works including Natural Architecture, Small Architecture (Iwanami Shoten Publishers), and Running Architect (Shinchosha Publishing). He has received many awards, both domestic and international, including the Benedictus Award from the American Institute of Architects, Architectural Institute of Japan Award, the Murano Togo Prize, and the Energy Performance + Architecture Award from France. Born 1954. Kengo Kuma was born in 1954 in Yokohama (Japan). He completed his master’s degree in architecture at the University of Tokyo in 1979. From 1985 to 1986 he studied at Columbia University as Visiting Scholar. He established Kengo Kuma & Associates in 1990. He taught at Keio University from 2001 to 2008 as professor, and in 2009 he was installed as Professor at the Graduate School of Architecture, University of Tokyo.
Among Kuma’s major early works are Kiro-san Observatory (1994), the guest house Water/Glass (1995, received AIA Benedictus Award), the Noh Stage in Forest at the Toyoma Center for Performance Arts (received in 1997 Architectural Institute of Japan Annual Award), the Nakagawa-machi Bato Hiroshige Museum of Art (2000, received The Murano Prize), Great Bamboo Wall in China (2002).
Recent works include Suntory Museum (2007), Nezu Museum (2009, Tokyo), Yusuhara Wooden Bridge Museum (2010, Yusuhara), Asakusa Culture Tourism Information Center (2012, Tokyo), the Nagaoka City Hall (2012, Nagaoka), The 5th Kabukiza (2013, Tokyo), Kyushu Geibunkan (2013), Tokyo Central Post Office KITTE (2013), Toshima City Hall (Tokyo, 2015), Toyama Kirari – Toyama Glass Art Museum and City Library (2015) and Komatsu Seiren Fabo (2015). Completed projects outside Japan include: Besançon Art Center and Cité de la Musique (2012) , FRAC (Fond Regional d’Art Contemporaine) Marseille (2013), Darius Milhaud Coservatory of Music (2013), Entrepot Macdonald (Education and Sport Complex, 2014), Lyon Confluence HIKARI (2015), China Academy of Art’s Folk Art Museum (2015). A number of large projects are also in progress internationally, such as the Victoria & Albert Museum building in Dundee (Scotland), University Multifunction Center at EPFL in Lausanne (Switzerland), Saint Denis station (France), Albert Kahn Museum (France), Padova Convention Center (Italy). Kengo Kuma & Associates are also working on the new national stadium of Japan along with Taisei Corporation and Azusa Sekkei.
Kengo Kuma was awarded with the International Spirit of Nature Wood Architecture Award in 2002 (Finland), International Architecture Awards for the Best New Global Design for Chokkura Plaza and Shelter in 2007 and Energy Performance + Architecture Award in 2008 (France). He is an International Fellow of RIBA in UK and Honorary Fellow of AIA of the US.
He has also written numerous books and most of the titles have been translated into Chinese and Korean. His major writings, Anti-Object, Natural Architecture, Small Architecture have been published in English from AA Publications, the book department of AA School, UK’s prestigious architecture institution.

The museum interior is divided into two sides which face each other across a decorative water basin, each side matching the program or the content of the exhibitions. You may be able to get a different perspective on the contrasting works displayed on either side of the glass wall. The karesansui (traditional dry landscape) garden on the 2nd floor terrace of the art museum expresses the museum's connection to Yufudake Mountain, which looms in the distance. At the foot of Yufudake Mountain, which is an active volcano, extends a vast green meadow, scattered throughout with black, bare rock. This landscape has been recreated with rocks and gravel that cover every inch of the ground, so that it may serve as a sort of front yard at the base of the mountain.

The black outer wall that covers COMICO ART MUSEUM YUFUIN is yakisugi (cedar planks burnt for durability). This black wooden material was chosen as it allows the building to blend into the Yufuin landscape, and brings into focus, Yufudake Mountain and its surrounding scenery. Yakisugi looks pitch black from far away, but when seen up close, it conveys the texture and warmth seen in wooden material, with this characteristic gaining more uniqueness as time passes. We believe that this is what 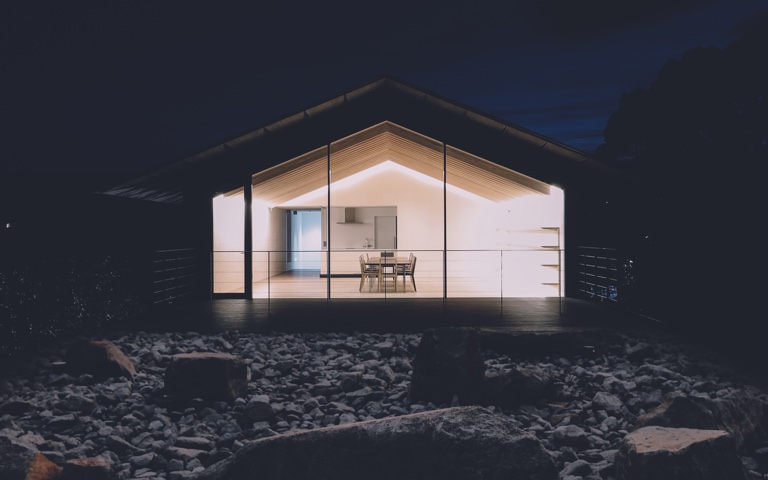 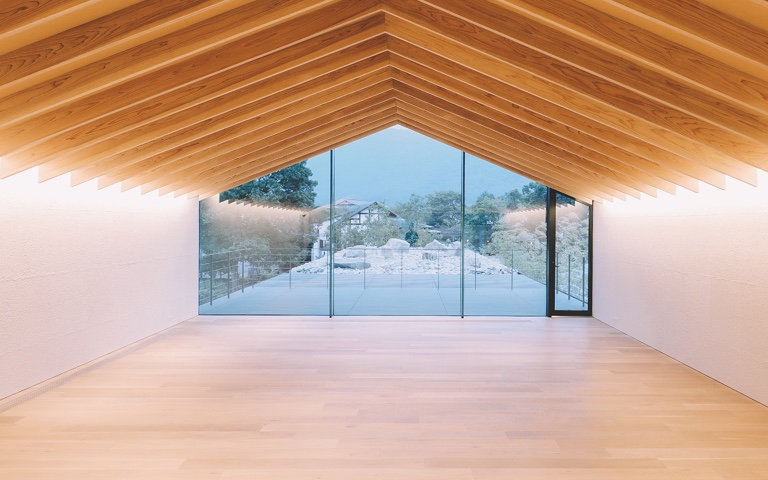 About the Museum About Its Construction